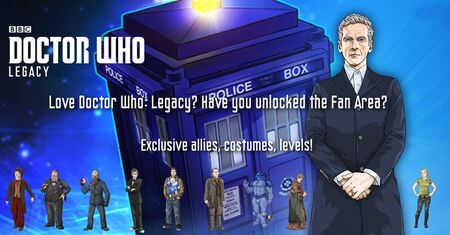 The Fan Area is a portion of the game accessible only to players who have purchased six or more time crystals in a single store transaction. Once access is granted to the Fan Area, it is perpetual from then on.

According to the game's FAQ, new content will be added and removed from this area over time with fan exclusive characters and levels (including beta versions of levels the developers are currently working on), and more. The Fan Area currently grants access to 40 allies (38 exclusive, 1 of which is Expert) and 38 outfits (26 exclusive).

Levels in the fan area can grant access to many things.

Time Crystal
A time crystal drop in a Fan Area level will only drop once per version of that level (easy, medium, hard), and will drop 100% of the time on the first playthrough of that level.
Ally
New allies will always be 100% drops in the fan area. This will drop once on the first runthrough of any level (regardless of the difficulty) and, like other allies, will never drop again. If an ally drops in a level, their portrait will be displayed when that level is selected as in the regular game.
Outfits
A level can drop a new outfit for the Doctor or an ally. The rules for this are the same as a new ally.
Time Fragment
A level can drop time fragments. These will always drop at a higher rate than in the rest of the game as a thank you to fans. These have a chance to drop every time you play the level, and you can see which fragments can drop on the level select screen as normal.

The following levels are currently available in the Fan Area. The level Experimental Relative Dimension changes each week, but maintains the same drops. Fan Area (Archive) contains all previous ERD levels, which follow distinct enemy patterns. The weekly level will no longer be documented as of March 31, 2018.

The following Allies can be unlocked in Fan Area levels. All of them except Stormageddon and Rose Tyler are currently exclusive to the Fan Area.

The following alternate outfits can be unlocked during Fan Area levels.

Retrieved from "https://dwlegacy.fandom.com/wiki/Fan_Area?oldid=63537"
Community content is available under CC-BY-SA unless otherwise noted.